On December 10th 2014 I purchased a MacBook Air on eBay for $560 from a seller going by the name of cashitin1. The machine was listed with this notation: “Mint looking condition with no dings and no scratches on screen and Powers on great but has pin/passcode lock and no previous owner info. Includes charger.” I thought the pin/passcode lock would be no problem, I’d just start the computer from an install DVD and reset the password.

The machine was shipped with a label stating it had been mailed by: Cayetano Romero, 3007 North 35th Avenue Phoenix Arizona 85017-5206.

One of the images of the computer shown on eBay: never buy a Macintosh whose screen looks like this.

The serial number on the bottom of the MacBook Air. 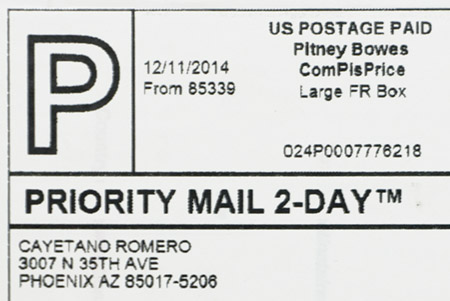 The shipping label used by Cayetano Romero. I searched Google Maps for this address and saw a picture of some tax preparation business taken in June 2011.

For about an hour after receiving the computer I tried all kinds of ways of starting it, from an install DVD, variously with T, D, C, Command-Option, Shift, etc. keys held down, to no avail, each time the computer asked for a four-digit PIN code, something I’d never seen before.

At this point I figured I’d go to the Genius Bar at the Apple Store and they’d be able to unlock the machine. Before going I was advised to make an appointment, so I started doing so by phone. A very friendly representative listened to my story, then asked precisely what the computer’s symptoms were, as well as the machine’s serial number.

eBay sent me an e-mail asking if I was satisfied with my purchase, so I wrote back expressing my extreme dissatisfaction with having been sold stolen goods.

Very quickly he sent me this message: “Hello, I contacted you before shipping this laptop to confirm that you READ the item description and as it showed in the pictures it has a LOCK. YOU confirmed that you still wanted it and that you were aware. Yet you still left me a negative feedback for this item even though IT WAS listed correctly and also we contacted you to confirm you were aware? Why would you do that? Please let me know. Thank You & Happy Holidays.”

I responded: “It is true that I read the description and understood the machine was locked, though I thought it would it would be easy to unlock it by starting from an install DVD. A representative at Apple told me the computer has been declared lost, which is tantamount to declaring it stolen. The computer is unusable by anyone except its (“previous”) owner. Since this computer is of no use to me I am returning it, unless you are able to unlock it for me somehow.”

He wrote back saying, “I sent him a message and he just responded. I don’t even think it’s worth replying to? Let me know what you think.”

I responded, “The only response and information that will be of any help will be a 4-digit PIN number to unlock the computer; the computer also must be taken out of “Lost Mode” on Apple’s iCloud service. Without the PIN number and the machine being declared not lost, this computer is of no use to me and I will return it.”

eBay very helpfully sent me a prepaid mailing label in Pdf format and I shipped the MacBook back the same day, the package was received and signed for by “C Urista” on December 24th, then on January 2nd 2015 Mr. Romero sent me this lame message:

“Hello, Did you put insurance on this item when shipping it? Because now I have to contact eBay before we can refund, as you sent the item back and it got a BIG DENT on corner. It was in mint condition and now its aluminum body is damaged and we lose more money on sale. I will let you know what they say. Let me know if it is insured and we can file a claim. Thanks.”

This message was stupid enough that I almost didn’t reply, though I did write back: “I didn’t pay for insurance when shipping the MacBook back, I just printed and used the shipping label Pdf that eBay sent me. Considering that you took a week to write me about this I doubt the computer arrived with a dent on it…”

On my eBay profile page Cashitin wrote a negative review on me: “BAD EBAY CUSTOMER ~ SAYS ONE THING & DOES ANOTHER * BEWARE *”. Ouch, you got me.

Mr. Romero tries to recuperate his losses with eBay

The same day he wrote eBay, saying: “Item was in MINT condition when sent to Buyer. BUT Buyer shipped it back not packaged good and now it got DAMAGED. It has a Big DINGED corner of the laptop and is now worth WAY less money. What do we do about this issue? I do not think it is fair that we have to lose the money on this item for it not being shipped properly. Please Help.”

On January 4th 2015 eBay wisely ignored Cashitin’s idiotic story and refunded all that I had paid for the MacBook, saying: “The seller agreed to issue you a refund, but unfortunately it looks like it was never sent. We apologize for the inconvenience this has caused and have issued you a refund for this case.” And I haven’t heard from Mr. Romero since.

Am I angry about all this?

Yes, because I spent hours following the auction, raising my bid whenever I saw that someone else (probably Mr. Romero) had raised their bid above mine; there was a concert I wanted to go to that night and I missed it. Then there was the frustration and stress after I received the computer, and more time spent following up. After all, I was so frustrated at not having a MacBook Air when I wanted one that I just went to the Apple Store and bought a new model with the same amount of RAM and internal storage.

Why did I write all this?

Obviously I was frustrated by all the time I wasted dealing with Cashitin and the unusable computer he sold me. I also made this page in case someone searches for that serial number so I can provide them with information on where the computer came from. I truly sympathize with whoever’s Macintosh is stolen, they are certainly the best computers made. Naturally this is why they are stolen so often, and why Apple has implemented their tracking system on the iCloud web site.

Morals of the story and lessons learned

Now I know the difference between a password and four-digit PIN number as concerns Apple computers. I’ve also learned about iCloud, Lost Mode, and the importance of registering one’s devices with Apple; I’ve done so for my new MacBook Air and iPod Touch. I tried searching Google for the serial number on the MacBook and found nothing, then I tried searching for a web site where one could report a stolen computer. I didn’t find much in doing so though I did learn about a program named “Prey”, which appears to go much further than iCloud, in recording thieves activities on stolen devices, taking pictures of them, snapshots of the screen, tracking their location, etc.

For Cashitin: Don’t try to sell stolen Apple computers, tablets, phones or iPod Touches, they’ll just be sent back to you because they’re of no use to anyone except their owner. In fact, don’t sell stolen goods period, it’s bad karma, and it’s too easy to make lots of money in so many other ways these days.